Over the past year, eight of the nine school districts in the 1A region maintained their annual letter grade, even under the state’s more rigorous grading system. Among the highlights: Vermilion Parish is one of only four districts in the state to earn an ‘A’ rating, and Early College Academy in Lafayette Parish is tied for the second highest performing school in the state. 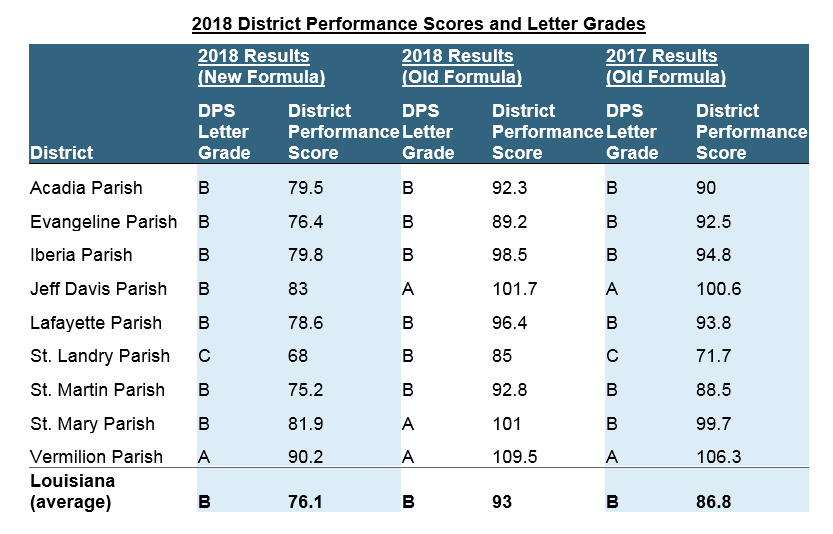 Starting with this year’s scores, the state adjusted the school rating system, to make the rigor of the annual scores more comparable to other states.

Since Louisiana's public school letter grade system was introduced in 2011, the benchmark for schools to earn an ‘A’ grade was the third-highest of five achievement levels, or “basic.” For the 2017-18 school year, that standard was raised to the second-highest level, or “mastery.”

The state also ended the practice of grading schools on a curve, where the distribution of schools rated A, B, C, D, and F was held constant from year to year.

With the tougher grading system, the distribution of school letter grades shifted modestly, with more schools rated ‘F’ and less schools rated ‘A.’ However, over time, the higher expectations are intended to drive better results, and the new system will provide a clearer measure of student achievement that allows for a more accurate comparison with other states.

In an effort to help families and the public better evaluate and compare individual K-12 public schools and child care centers, the Louisiana Department of Education launched the Louisiana School Finder, available at www.louisianaschools.com. This interactive tool offers user-friendly details on schools and centers, including information on student performance, course offerings, and extracurricular activities.

To gain a more comprehensive picture of student achievement across the Acadiana region, 1A created the Acadiana Education Dashboard, available at oneacadiana.org/education. The dashboard provides user-friendly, interactive data on education outcomes, ranging from 3rd grade reading to college graduation. Launching the dashboard is the first step in the new “55 by 25” initiative 1A is developing, focused on increasing the region’s educational attainment rate, or the proportion of working adults with a college degree or other workforce-relevant credential, to 55% by 2025.