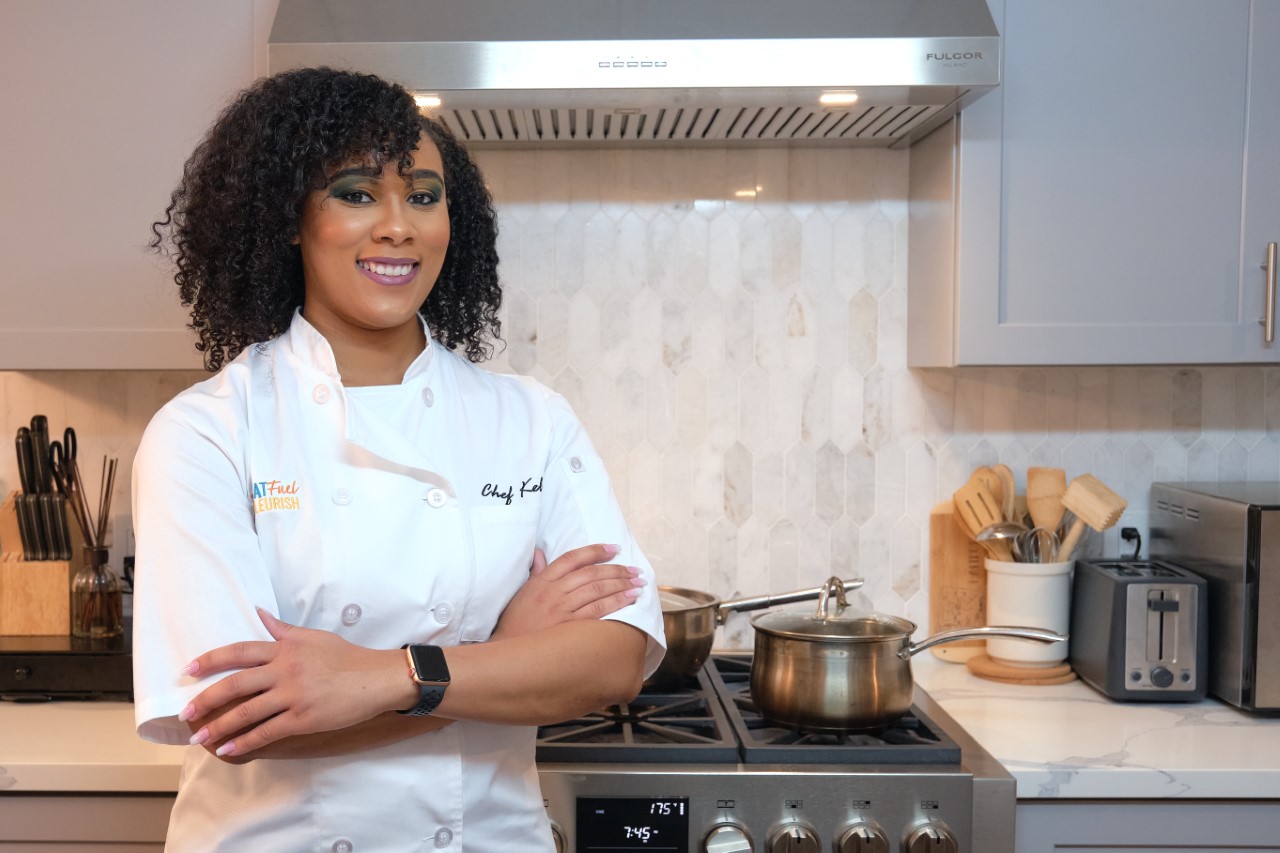 Mix a love of cooking with a desire to eat healthy, let it stew for a few years, and sprinkle in a dash of entrepreneurship, what do you get? You get Kelsey Sander’s recently launched small business, “Eat Fuel Fleurish,” which “offers balanced meals that provide adequate fuel to help the body fleurish”.

Sanders runs this one-woman operation, and her business has grown from making roughly 100 meals a month, when she started in March 2020, to making 100 meals a week, on average, in November 2020. Though her journey to business ownership has been a long one, she has seen quick returns. She first developed a passion for cooking as a little girl and,as a college undergrad, developed that passion into a skill while cooking healthy pre-prepared meals for herself.

“My father died of a heart attack,” the Patterson-native shared, “after his passing put things into perspective, I began cooking health-conscious meals.”

What’s in a Name?

As 2019 closed, she started to receive requests to meal prep for others. Those requests opened her eyes to the possibilities of turning her skill into a business. With a 2020 vision board, she promised herself she would start, but first, she needed a name for her enterprise.

Sanders was determined to make 2020 a year of progress. But, with the need to juggle her full-time retail job and her MBA course-load from the University of Louisiana at Lafayette, January and February came a went without the time to dedicate to her new idea. Then March hit, bringing COVID-19, and with it, obvious challenges and the hidden opportunity of time. Sanders fulfilled orders for her first two customers in March, marking the official beginning of her business.

“Though I was only selling 100 meals to two customers,” Sanders said, “I took it as a sign that I had something.”

In April, when Sander’s hours were cut at work, she had more time to devote to her business and turned to One Acadiana’s Small and Minority Business Program for guidance. 1A’s program aided her in registering her business as an LLC with the Louisiana Secretary of State’s Corporations Division. 1A also assisted her in trademarking “Eat, Fuel, Fleurish,” so that the name remained protected throughout the state as her brand grew and her customer base expanded to Baton Rouge.

“In March, I sold 100 meals total, and in April, I sold a month’s total in one week, so that’s when things really started picking up for me. I didn’t expect it, but they picked up drastically. Now I make 100 meals a week on average. If it weren’t for the pandemic, I’d still be stuck in my old hustle and bustle.”

From March to August 2020, Sander still worked at her job Monday through Friday, so Thursday, Friday, Saturday, and Sunday, she would dedicate herself to her meal prepping business, with little sleep. Her position was cut in August, and she was given an ultimatum: work another position or quit. She decided to pursue her own business, full-time and has done so since then.

“I love the culture here, but something else I love about being based in Lafayette is the benefit of word of mouth. I’ve seen a lot of traction with that.”

With the unique challenges of running a meal prep business, Sanders has already put her MBA to use and shared her perspective on the highs and lows of being a business owner and wearing multiple hats.

“I am the chef, owner, secretary, and accountant of my business. I love being my own boss, doing what I want, setting my own goals, and planning my own day.”

While she’s not making her most-requested meals (her much-buzzed-about ground turkey meatloaf and mashed potatoes or salmon), she’s planning out the upcoming menu or educating her customers about blending healthy options into their meals as they navigate starting their own health journeys. She also carries out her own marketing and was pleasantly surprised to find when she posted about her personal weight loss journey, “that’s when people started to respond.”

No matter how many hats she wears, she enjoys the fact that she can give her business her full time and full effort.

“Food is my love language,” she says, taking pride in the fact that customers say her “authenticity shines through” as she tries to keep her social media marketing consistent.

This Thanksgiving, the fruits of her hard labor paid off. With a goal of catering five Thanksgiving meals, she exceeded that and was hired to cater eight. Ironic, considering her own initial doubts.

“I’m proudest of overcoming my initial fear. I didn’t think I would have enough customers when I started; now it’s the least of my worries.”

To others thinking of starting their own business, she says, “My biggest advice is just to start; people think they have to have a lot of money. I set my own paycheck aside week by week, month by month. I would also suggest they reach out to someone. If you reach out to 1A, it will take you less time to knock out tasks, people waiting to help you.”

With her commencement date set for December, the chef will graduate with both her master’s degree and dream in hand. Though she is still a one-woman operation, she intends to change that in 2021 and looks forward to tapping into 1A’s Small and Minority Business Program in the future.

“Corey helped me get through the business process, even being in the MBA program there are some things you just don’t learn. He gave me that worry-free feeling and was always ready to get the answers or find someone who could get me the answers I needed.”