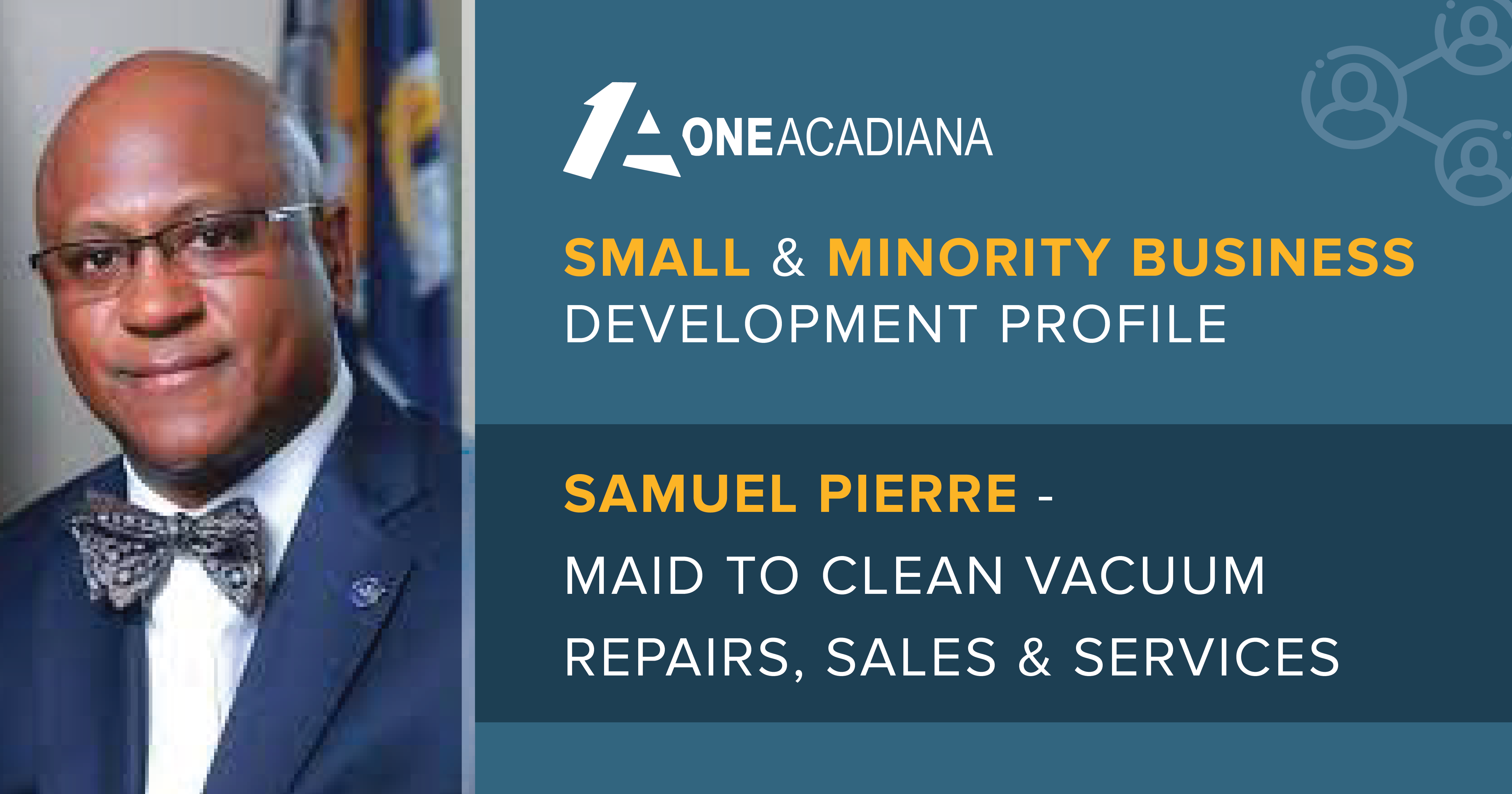 As the owner of Maid to Clean Vacuum Repairs, Sales & Service Inc, Samuel Pierre has achieved his dream of self-employment, a reality he would not trade for anything. With his repair expertise, Pierre remains hands-on with every aspect of the business, and it was a desire to see his business reach new levels that led him to One Acadiana’s Small and Minority Business (SMB) Program where he found just the resources he needed.

Maid to Clean Vacuum Repairs, Sales & Services began as the storefront Emma Dee’s, serving customers’ vacuum cleaner needs. Since Samuel Pierre purchased and renamed the business in 2013, the storefront has evolved into a one-stop location for full equipment repair, sale, and services.

“The business originally started in 1973 as a Kirby vacuum cleaner store,” says Pierre. “Now, we do more than just vacuums, we repair full equipment, including buffers, wet-dry vacuums, and carpet cleaners, we sell hard-to-find furniture polishes and fragrances, and we provide other supplies that are unique to the cleaning business.”

Pierre gained his entrepreneurial spirit and know-how from a young age, younger than most. As a young man, he watched his siblings start and operate a janitorial commercial cleaning service. The youngest child of 10, he quickly found himself helping his older siblings.

“We would do residential, commercial, pre- and post-cleaning,” Pierre shares. “As the youngest one, I would prepare the cleaning crews to make sure they had adequate resources, supplies, and vacuum cleaners. In addition to that, I would fix the machines at a very young age. I did not have formal training, I just tinkered, changing belts, and motors, and cords. I was about nine or ten years old, in middle school, not quite in high school.”

His brothers and sisters would buy parts and machines from Emma Dee’s, one of the few stores in Louisiana where equipment could be purchased. This led to Pierre’s familiarity with the owners.

After obtaining his master’s degree in public administration and retiring at a young age, Pierre returned to his hometown of Lafayette in 2012 and noticed that Emma Dee’s was up for sale. Driven by the desire to be his own boss and building off of a relationship he had built with the previous owners, he took the leap of faith and purchased the storefront and inventory in 2013.

Though he faced some community pushback, Pierre’s ultimate decision was to change the name and give the store a new identity, naming it Maid to Clean after his freelance endeavor repairing floor machines while he was still working full time.

“I worked for many years for others,” Pierre shares, adding that he loves being “totally independent and able to make my own rules, policies, and procedures.”

Pierre continued to diversify the business, adding new makes and models of floor equipment starting in 2016, but he wanted to take the business further. It took Pierre reconnecting with Corey Jack, 1A’s SMB Program Manager to open the doors to new business resources.

“I’m located on Simcoe, it is an area that was once heavily trafficked, but during the economic downturn many of the businesses around closed down, so I needed something to increase traffic and customers. Speaking to a friend of mine, they recommended Corey Jack.”

With Jack’s help, Pierre uncovered his business’ greatest need—a website. Though Maid to Clean was known by many local customers, shoppers outside of the geographic market were unaware of the services offered. It is also through the SMB Program that Pierre learned about UL Lafayette’s Louisiana Entrepreneurship & Economic Development (LEED) Center.

Led by Director, Dr. Geoffrey Stewart, the LEED Center advances high-growth entrepreneurship and cultivates innovation. Through the LEED Center, five MBA students evaluated Maid to Clean, creating a SWOT analysis and highlighting the business's need for marketing. Armed with that analysis, the students created a presence on Facebook, helping Maid to Clean take its first steps into the online landscape.

To tackle the bigger need of a website, the SMB Program connected Maid to Clean with another business resource available to entrepreneurs, the Louisiana Small Business Development Center (LSBDC), led by Heidi Melancon. Through the LSBDC, Pierre was able to apply for and receive a grant to build a website, partnering with Revisions Marketing to set it up in a matter of months. The results, he says, have been remarkable.

Pierre says: “Due to having an internet presence my business has increased by at least 35 to 40%. I’m very busy and that’s what I want to be. The resources are there; I just did not know they were there. As a result of me knowing about them, I am introducing others, so they’re able to take advantage of business resources too.”

Insatiable Desire To Do Business

Maid to Clean remains a staple of Simcoe and Pierre plans to keep it that way, staying true to the store’s original roots as it continues to grow an online presence and tap into businesses resources.
And while Pierre’s advice to anyone hoping to become an entrepreneur is a resounding “go for it,” he provides one caveat.

“You have to have an insatiable desire to do it,” says Pierre. “If you have a dream of being self-employed you just have to jump in.”

When weighing in on the pros and cons of business ownership, Pierre says: “Listen, it is a risk, but I firmly believe nothing ventured nothing gained. If you don’t try it, you won’t know. When I first opened the store, people said the carpet industry was dying, but I defied that. Seven years later and I’m still open. There are obstacles to overcome and sometimes the money goes back into the business instead of the business owner’s pockets, but to me, it all balances out with the perks of being self-employed.”