One Acadiana President and CEO Troy Wayman has been front and center as businesses reopen in the pandemic. One Acadiana has had a long-running list of resources for businesses trying to chart a path forward. He joined Acadiana's Morning News with Rob Kirkpatrick and Bernadette Lee.

Listen to the Interview on KPEL...

The Lafayette Parish School Board could spend up to $1.5 million to help needy families with internet access as the system considers virtual learning options for students.

The district will provide money for the district's Link and Learn internet program, a partnership with Love Our Schools and local providers to offer low-cost, open, wireless internet for qualifying families of Lafayette students.

The Lafayette Parish School Board allocated $1.5 million Tuesday toward providing short-term internet connectivity solutions for students without internet access as part of a public-private partnership with local philanthropists and businesses.

The Lafayette Parish School Board has allocated $1.5 million toward providing short-term Internet solutions for students who lack access as part of a public-private partnership with local philanthropists and businesses.

The Lafayette, La., Parish School Board allocated $1.5 million Tuesday toward providing short-term internet connectivity solutions for students without internet access as part of a public-private partnership with local philanthropists and businesses.

Coldwell Banker Trahan Real Estate Group has been named the Small Business of the Year for the Junior Achievement of Acadiana's annual Business Hall of Fame.

1. Give us a brief history of your company.

Louisiana Home Lending was started in late 2017 with the mission to provide simple, easy, and smart home financing at the best value possible. We've grown quickly since then to 10 employees licensed in two states. (LA & TX).

2. What would you tell the rest of Acadiana makes you special?

JENNINGS, LA. - JD Bank is pleased to announce that Trisha Crappell has joined the Mortgage Department as a Mortgage Loan Originator. Her office is located in Lafayette at our branch at 300 Verot School Road. “Trisha is a great addition to our mortgage team,” said Lisa Johnson, VP Mortgage Department Manager. “She is committed to helping customers make their dream of homeownership a reality.”

It's been a long time since Blaise Zuschlag washed an ambulance at Acadian Companies in Lafayette, but his work ethic inspired longtime CEO Richard Zuschlag to tap his son as the company's next chief administrative officer.

"Blaise spent his summers washing ambulances or running errands, stuck outside in the hot summer sun while his older brother was in the air conditioning, but he didn't complain too much," the CEO and board chairman said.

1A Member Restaurants Open Before 8:30 AM 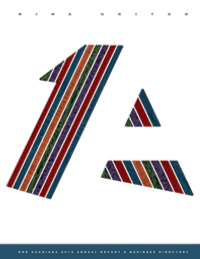 Click the play button above to watch One Acadiana President & CEO Troy Wayman on the Louisiana Business & Industry Show.

Click the icon to listen to One Acadiana President & CEO Troy Wayman give updates on One Acadiana's progress and initiatives on OUT TO LUNCH.